DAY OF NATIONWIDE ACTION FOR HEALTH

On April 7, 2020, on the occasion of  World Health Day, against the climate of authoritarianism and silence which the ND government tried to impose, dozens of dynamic mobilizations took place all over Greece, in the gates and in the courtyards of hospitals.

The mobilizations were initiated by the Federation of Doctors' Associations in Hospitals (OENGE), demanding the immediate adoption of measures to substantially strengthen public health, to protect the people.

On the side of the hundreds of hospital employees were cadres of the Communist Party of Greece (KKE), the All Workers' Militant Front (PAME), and other mass organizations, such as the Federation of Greek Women (OGE) and others.

The GS of the CC of the KKE, Dimitris Koutsoumbas, participated and addressed a greeting in one of these mobilizations, in one of the largest hospitals in the country, "Thriasio".

It should be noted that in one of the mobilizations, which took place at the "Evangelismos" Hospital (Athens), in the presence of George Perros, from the Executive Secretariat of PAME, representatives of trade unions and mass organizations, among them the president of OGE, Chr. Skaloumbaka, as well as KKE MP and Central Committee member Nikos Karathanassopoulos, the government sent strong police forces to the hospital's courtyard, seeking to disperse the rally, under the pretext of "banning rallies of more than 10 people". Eventually the police forces withdrew under the immediate reaction of the workers and the people. 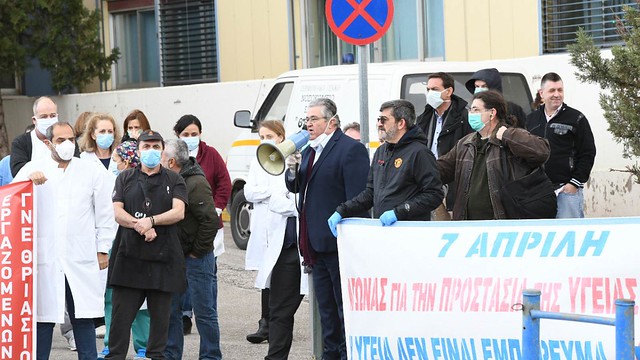 DIMITRIS KOUTSOUMBAS: We stay strong, we unite our voice with the employees in the Health sector!

In a statement for World Health Day, the GS of the CC of the KKE, Dimitris Koutsoumbas, noted the following:

"Today, on World Health Day, a day of nationwide action for Health, we unite our voice with the workers in hospitals and healthcare units, who are currently at the forefront of the battle in for our people to come out stronger from this situation.

This is why we demand: